Project ONE is an investment by INEOS in the Antwerp chemical sector to build an ethane cracker. The plant will produce the gas ethylene. This is a building block for chemicals necessary for products that we use daily in the automotive, construction, energy, food hygiene and medical sectors. Examples include insulation materials, medical equipment, wind turbines and lightweight components for the vehicles of the future.

The International Energy Agency has estimated the future demand of Primary Chemicals. To do so, they have developed two scenarios – a Reference Technology Scenario based on established trends, and a Clean Technology Scenario, assuming UN Goals are reached, including increased production of recycled plastics. Even in the most sustainable scenario (Clean Tech Scenario), demand for base chemicals, such as ethylene, will increase by about 40 percent between 2017 and 2050. This is due to a rising world population, rising prosperity and social developments (among other things, less demand for disposable plastics such as plastic bags, more demand for them for components of electric cars).

Today, ethylene in Europe is largely produced from naphtha (a crude oil derivative) and with older technology. The vast majority of ethylene plants in Europe were built in the 1960s and 1970s. It is 25 years since a new one was built here. Decisive action is therefore needed, as the European and Flemish governments have set ambitious environmental and climate targets, such as zero greenhouse gas emissions in the EU by 2050.

As the largest investments over the past 20 years have been in China, the USA and the Middle East, Europe risks falling behind. Already, European imports of ethylene are growing because local ethylene supplies cannot keep pace.  Not only does this have an economic and geostrategic impact, it also makes it more difficult to make the sector more sustainable through R&D and through technological innovation.

Building bridges to a sustainable future

Leaving things as they are is not an option. It would halt Europe’s economic resilience and slow down sustainable investment while further reducing the value of the European cluster. Instead, we can already renew and replace the 50-year-old production processes currently in place in Europe with assets that have a much smaller footprint and the capability to become fully carbon-neutral in the future. At the same time, we can strengthen our economy and strategic autonomy.

Project ONE of INEOS is the game changer here. The plant will emit less than half of CO2 than the current best performing European similar plants for the same production. Compared to the average European steam cracker, Project ONE’s performance in terms of carbon footprint is even three times better. Project ONE will produce 1,450Mt of ethylene annually. Project ONE emits 0.29 tonnes of CO2 per tonne of HVC1 or just 43% of the current EU ETS benchmark value2 of 0.68 tonnes of CO2 per tonne of HVC.
When Project ONE is launched, it will therefore also enter the group of best-performing plants and further reduce the benchmark, making older, more polluting plants less profitable and causing them to disappear from the market gradually3.

By switching from ethylene sourced elsewhere to ethylene produced by the top-performing Project ONE, INEOS customers will be able to reduce the carbon footprint of their ethylene-based end products by more than two million tonnes per year – equivalent to removing 1.6 million cars from European roads every year.

In stages towards climate neutrality

The route to a climate-neutral future runs in stages. If we were to wait until the technology for fully climate-neutral ethylene plants is ready, we would remain stagnant for one or more decades. With Project ONE, we have the choice even today to reduce the CO2 emissions of ethylene production with the best available technology (1), combined with a future-proof design towards climate neutrality (2).

The key technologies to achieve the emissions performance of Project ONE are:

By anticipating technologies now that are mature in the future and that will be able to be deployed on an industrial scale, Project ONE will have a role in a climate-neutral future. The flexibility to implement these interventions as soon as possible is already built into the design of Project ONE.

Since we start the journey to zero so much closer to the destination than everyone else, and
have designed our cracker with the journey in mind, we are best positioned to get there. 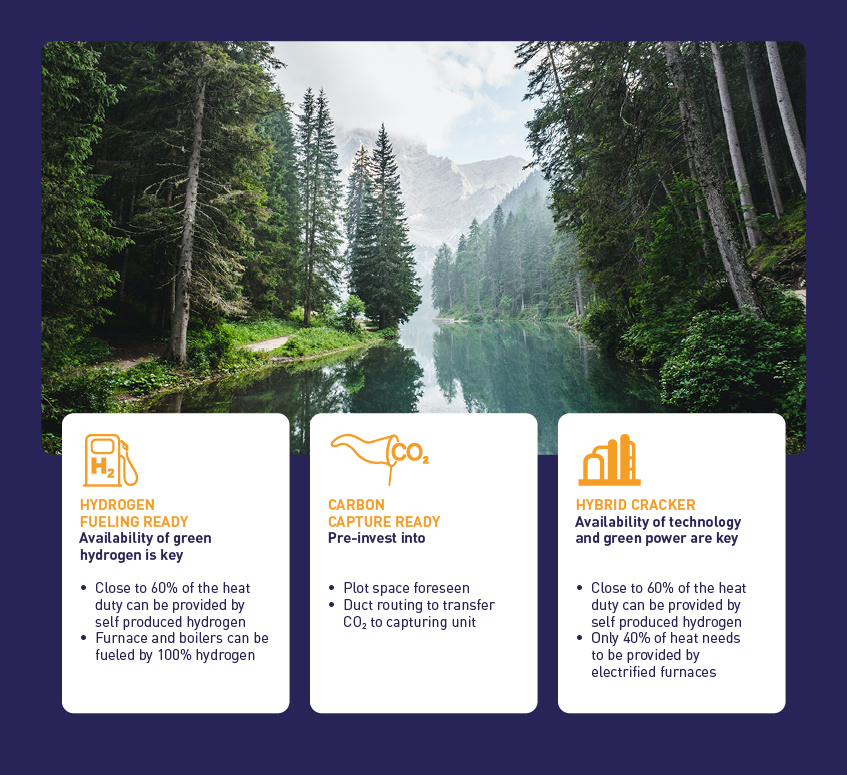 These plant design choices meet the current plans at the EU and Flemish level, with regard to:

INEOS is doing this in the context of its ambition to become climate neutral for all its Antwerp sites, so including Project ONE, by 2050. To this end, we have developed a scientifically substantiated roadmap for all INEOS sites in the port of Antwerp. The measures include:

In addition, Project ONE will directly create 300 permanent, high-quality jobs in Antwerp (and 150 permanent contractors) and generate five times as many additional jobs in supporting industries and at different levels of the customer-supplier value chain in Flanders, Belgium and across Europe.

The route to a climate-neutral future runs in stages. Today, the growing demand for ethylene is being met in Europe by plants that are more than 25 years old and work primarily with a derivative of crude oil. We can do something about that today. With Project ONE, we are getting a brand new plant that will emit half as much as the plants that are today’s best performers. In addition, as a result of Project ONE, via the ETS system, the most polluting plants will have to pay more emission rights or invest to operate in a more environmentally friendly manner.